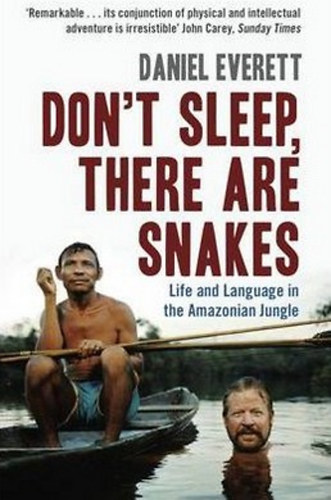 Don't Sleep, There Are Snakes: Life and Language in the Amazonian Jungle

SignatureReviewed by Christine KenneallyThe ways language and thought intertwine have long intrigued scientists. Does language shape the way we see the world? Does the world influence the structure of language? Do we think in words? Such lofty questions pondered in many an ivory tower would go unanswered without the mostly anonymous work of field linguists. These scholars venture into isolated communities and wrestle with culture shock, broken tape recorders and dysentery—all to learn an unfamiliar language from the ground up. Their work is painstaking, and no matter how smart or how educated they are, their projects must begin with the most elementary communicative tactics—they point at a rock or a tree or a bird, and whether they are in Australia's Western Desert, the remote islands of Indonesia or the jungles of Brazil, their interlocutor will respond, rock or tree or bird in the native tongue. Dan Everett's life as a field linguist began when he entered a Pirahã village in the Amazonian jungle in December 1977. After being greeted by a happy, chattering crowd, he walked over to a man cooking on a small fire. First, he tapped his own chest and said, Daniel, then he pointed at the animal being cooked on the fire. Káixihí, said the man. Everett pointed at a stick. Xií said the man. Everett dropped the stick and said, I drop the xii. Xií xi bigí kíobíi, his new friend replied, meaning stick it ground falls. Thus began 30 years of dedication to the Pirahã and their native tongue, a mystifying system of sound and rules unrelated to any other language in the world. In this fascinating and candid account of life with the Pirahã, Everett describes how he learned to speak fluent Pirahã (pausing occasionally to club the snakes that harassed him in his Amazonian office). He also explains his discoveries about the language—findings that have kicked off more than one academic brouhaha. Everett learned that Pirahã does not use what are supposed to be universal aspects of grammar, an observation that runs counter to linguistic dogma about how culture, the brain and language connect. For Everett, Pirahã is evidence that culture plays a crucial and previously unacknowledged role in the creation of language.Everett's life with the Pirahã cost him dearly. He almost lost two family members to malaria, and his first marriage broke down after years of highly productive shared field work. But life in the Amazon taught him a great deal about human nature, too, perhaps more about his own than that of the Pirahã. Everett began his linguistic work as a Christian missionary, but the Pirahã were marvelously impervious to his promise of a life with Jesus. They pointed out that Everett simply had no proof for the supernatural world he described, and in the end he found himself agreeing with them. He left the church, choosing a world that more honestly integrated his goals as a scholar with the world view of his Pirahã friends—one where evidence matters. (Nov. 11)Christine Kenneally is the author of The First Word: The Search for the Origins of Language, a finalist for the L.A. Times Book Prize.