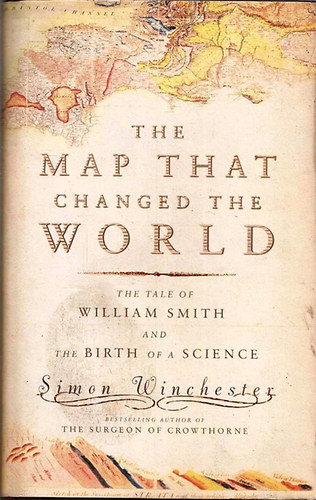 In 1793, a canal digger named William Smith made a startling discovery. He found that by tracing the placement of fossils, which he uncovered in his excavations, one could follow layers of rocks as they dipped and rose and fell -- clear across England and, indeed, clear across the world -- making it possible, for the first time ever, to draw a chart of the hidden underside of the earth. Determined to expose what he realized was the landscape's secret fourth dimension, Smith spent twenty-two years piecing together the fragments of this unseen universe to create an epochal and remarkably beautiful hand-painted map. But instead of receiving accolades and honors, he ended up in debtors' prison, the victim of plagiarism, and virtually homeless for ten years more. Finally, in 1831, this quiet genius -- now known as the father of modern geology -- received the Geological Society of London's highest award and King William IV offered him a lifetime pension.

The Map That Changed the World is a very human tale of endurance and achievement, of one man's dedication in the face of ruin. With a keen eye and thoughtful detail, Simon Winchester unfolds the poignant sacrifice behind this world-changing discovery.

How are we going to explain this? - Our future on a hot earth

Handbook of tables for probability and statistics

Life Itself: Its Origin and Nature

Round the World Handbook

A GUILDE TO FIELD IDENTIFICATION BIRDS OF NORTH AMERICA

Handbook of tables for probability and statistics

Judging Edward Teller: A Closer Look at One of the Most Influential Scientists of the Twentieth Century - Dedikált

Lilly on Dolphins: Humans of the Sea

The Making of American Landscape

An Instant Guide to Medicinal Plants

The Fracture Zone - A Return to the Balkans