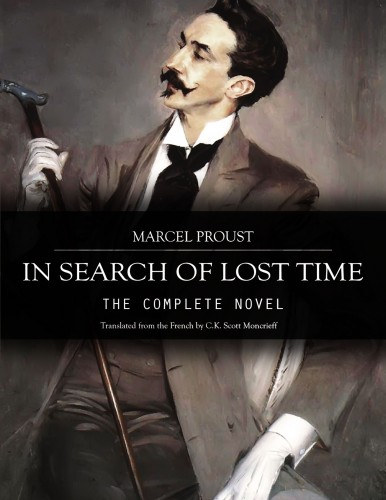 In Search of Lost Time

In Search of Lost Time, is a novel in seven volumes, written by Marcel Proust (1871–1922). It is considered to be his most prominent work, known both for its length and its theme of involuntary memory, the most famous example being the "episode of the madeleine" which occurs early in the first volume.The novel began to take shape in 1909. Proust continued to work on it until his final illness in the autumn of 1922 forced him to break off. Proust established the structure early on, but even after volumes were initially finished he kept adding new material and edited one volume after another for publication. The last three of the seven volumes contain oversights and fragmentary or unpolished passages, as they existed only in draft form at the death of the author; the publication of these parts was overseen by his brother Robert.The work was published in France between 1913 and 1927. Proust paid for the publication of the first volume after it had been turned down by leading editors who had been offered the manuscript in longhand. Many of its ideas, motifs and scenes are foreshadowed in Proust's unfinished novel, Jean Santeuil (1896–99), though the perspective and treatment there are different, and in his unfinished hybrid of philosophical essay and story, Contre Sainte-Beuve (1908–09). The novel had great influence on twentieth-century literature; some writers have sought to emulate it, others to parody it. In the centenary year of Du côté de chez Swann, Edmund White pronounced À la recherche du temps perdu "the most respected novel of the twentieth century."

Walden (also known as Life in the Woods) by Henry David Thoreau is one of the best-known non-fiction books written by an American. Published in 1854, it details Thoreau's life for two years and two...