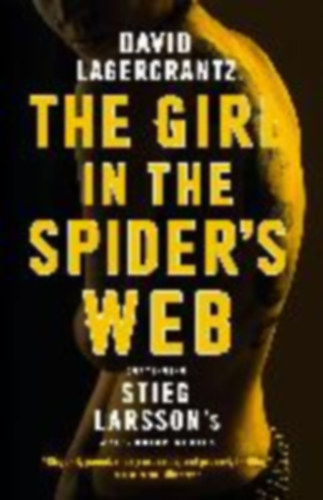 THE GIRL WITH THE DRAGON TATTOO IS BACK WITH A UK NUMBER ONE BESTSELLER Lisbeth Salander and Mikael Blomkvist have not been in touch for some time. Then Blomkvist is contacted by renowned Swedish scientist Professor Balder. Warned that his life is in danger, but more concerned for his son's well-being, Balder wants Millennium to publish his story - and it is a terrifying one. More interesting to Blomkvist than Balder's world-leading advances in Artificial Intelligence, is his connection with a certain female superhacker. It seems that Salander, like Balder, is a target of ruthless cyber gangsters - and a violent criminal conspiracy that will very soon bring terror to the snowbound streets of Stockholm, to the Millennium team, and to Blomkvist and Salander themselves. Lagercrantz has constructed an elegant plot around different concepts of intelligence... his continuation, while never formulaic, is a cleaner and tighter read than the originals... Without ever becoming pastiche, the book is a respectful and affectionate homage to the originals. -- Mark Lawson Guardian. As I read Lagercrantz's The Girl in the Spider's Web, I found that I kept forgetting for several pages at a time that I wasn't reading genuine Larsson... One devours Larsson's books for the plots, the action, the anger, and most of all for Lisbeth Salander... Lagercrantz has caught her superbly, and expertly spun the sort of melodramatic yarn in which she can thrive. -- Jake Kerridge Daily Telegraph. Fans of Stieg Larsson's captivating odd couple of modern detective fiction - the genius punk hacker Lisbeth Salander and her sometime partner, the crusading investigative journalist Mikael Blomkvist - will not be disappointed... Salander and Blomkvist have survived the authorship transition intact and are just as compelling as ever. -- Michiko Kakutani New York Times. Elegantly paced, slickly executed, and properly thrilling. -- Alison Flood Observer First, the conclusion. David Lagercrantz has done well...The Girl in the Spider's Web conveys the essence and atmosphere of Larsson's Millennium novels. He has captured the spirit of their characters and devised inventive plots, most of them suitably exaggerated... On the evidence of Spider's Web, most Millennium fans will want to continue following their Lisbeth. -- Marcel Berlins The Times. Lagercrantz's real achievement here is the subtle development of Lisbeth's character; he allows us access to her complex, alienated world but is careful not to remove her mystery and unknowability. Lisbeth Salander remains, in Lagercrantz's hands, the most enigmatic and fascinating anti-heroine in fiction. -- Barry Forshaw Financial Times. Rest easy, Lisbeth Salander fans - our punk hacker heroine is in good hands... Swedish crime novelist David Lagercrantz takes the reins with prowess, not only mimicking Larsson's shamelessly pulpy prose, but admirably expanding the deliciously depraved world of the novels. -- Patrick Ryan USA Today.

The Girl Who Takes an Eye for an Eye

Gone Girl meets Fatal Attraction in Caroline Kepnes' YOU, a chilling account of the twisted psychology behind unrelenting passion.