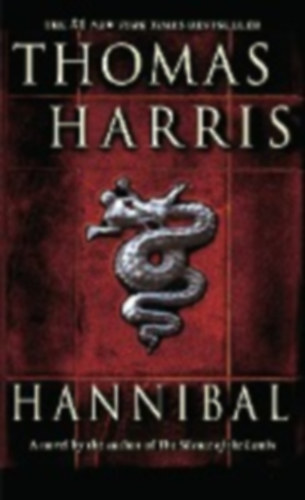 #1 NEW YORK TIMES BESTSELLER • "Is it as good as Red Dragon and Silence of the Lambs? No... this one is better."-Stephen King, The New York Times Book ReviewYou remember Hannibal Lecter: gentleman, genius, cannibal. Seven years have passed since Dr. Lecter escaped from custody. And for seven years he's been at large, free to savor the scents, the essences, of an unguarded world. But intruders have entered Dr. Lecter's world, piercing his new identity, sensing the evil that surrounds him. For the multimillionaire Hannibal left maimed, for a corrupt Italian policeman, and for FBI agent Clarice Starling, who once stood before Lecter and who has never been the same, the final hunt for Hannibal Lecter has begun. All of them, in their separate ways, want to find Dr. Lecter. And all three will get their wish. But only one will live long enough to savor the reward.... Praise for Hannibal"Interested in getting the hell scared out of you? Buy this book on a Friday... lock all doors and windows. And by Monday, you might just be able to sleep without a night-light."-Newsday"Strap yourself in for one heck of a ride.... It'll scare your socks off."-Denver Post "A stunner... writing in language as bright and precise as a surgeon's scalpel, Harris has created a world as mysterious as Hannibal's memory palace and as disturbing as a Goya painting. This is one book you don't want to read alone at night."-The Atlanta Journal-Constitution"Relentless... endlessly terrifying... 486 fast-paced pages, in which every respite is but a prelude to further furious action... Hannibal begins with a murderous paroxysm that leaves the reader breathless.... Hannibal speaks to the imagination, to the feelings, to the passions, to exalted senses and to debased ones. Harris's voice will be heard for a while."-Los Angeles Times"A pleasurable sense of dread."-The Wall Street Journal"Enormously satisfying... a smashing good time, turning the pages for thrills, chills, horror and finally, a bracing, deliciously wicked slap in the face... perhaps the very best the thriller/horror genre is capable of producing."-San Diego Union-Tribune

The Silence of the Lambs

Gone Girl meets Fatal Attraction in Caroline Kepnes' YOU, a chilling account of the twisted psychology behind unrelenting passion.