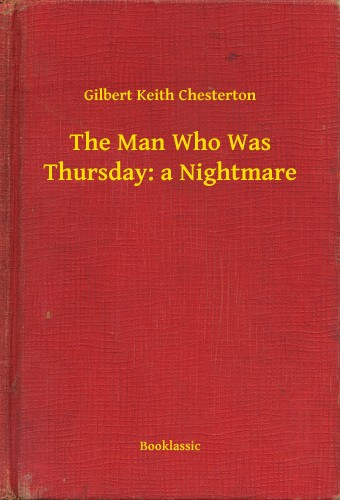 The Man Who Was Thursday: a Nightmare

The Man Who Was Thursday: A Nightmare is a novel by G. K. Chesterton, first published in 1908. The book has been referred to as a metaphysical thriller.Although it deals with anarchists, the novel is not an exploration or rebuttal of anarchist thought; Chesterton's ad hoc construction of "Philosophical Anarchism" is distinguished from ordinary anarchism and is referred to several times not so much as a rebellion against government but as a rebellion against God.The novel has been described as "one of the hidden hinges of twentieth-century writing, the place where, before our eyes, the nonsense-fantastical tradition of Lewis Carroll and Edward Lear pivots and becomes the nightmare-fantastical tradition of Kafka and Borges."